DAPL: Join us in engaging banks and financiers! 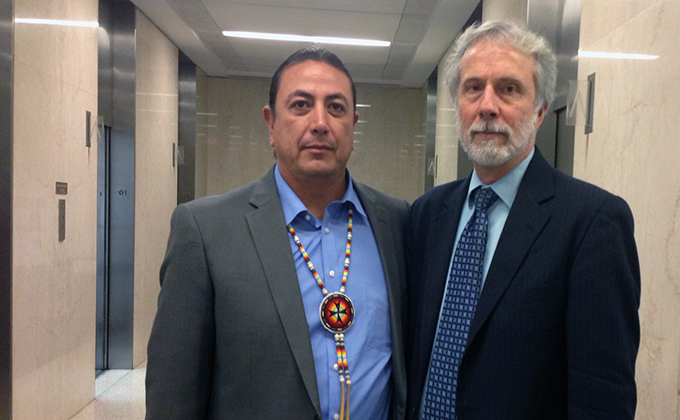 This past week brought welcome news when the U.S. Department of the Army stated that it would not approve an easement for the proposed Dakota Access Pipeline (DAPL) to cross under Lake Oahe in North Dakota. The Department requested that the Army Corps of Engineers carry out a full Environmental Impact Statement (EIS) to consider alternate routes for the pipeline crossing. While this is a big victory for the Standing Rock Sioux Tribe and Indigenous communities, the incoming Trump Administration could work to overturn the decision over the coming year. Therefore, investors must remain vigilant and focus on all areas of engagement, including the banks financing the pipeline. In October, Boston Common supported a full EIS and pipeline reroute to avoid the primary water source for the Tribe. Going forward, we believe investors must continue to work with companies and key stakeholders to address the risks of DAPL and seek a constructive resolution.

As chair of the Investors and Indigenous Peoples Working Group (IIPWG) advocacy committee, Steven Heim moderated a December 5th investor webinar, which focused on the stranded-assets risks of DAPL. The Standing Rock Sioux Tribe, First Peoples Worldwide, and the IIPWG sponsored the webinar. Over 150 investors and others globally participated to hear the Chairman of the Standing Rock Sioux Tribe, Dave Archambault II, Director of Energy Finance at the Sightline Institute and co-author of the report “The High Risk Financing Behind the Dakota Access Pipeline”, Clark Williams-Derry, and the Charles R. Johnson Endowed Professor of Journalism at the University of North Dakota, Mark Trahant.

Steven Heim and Lauren Compere of Boston Common met with three of the four major lenders to the Dakota Access Pipeline. TD Bank and Citibank have issued statements in response expressing concern for the manner in which Energy Transfer Partners has handled the project. Lauren traveled to Japan to meet with Mitsubishi UFJ Financial Group; they have yet to comment publicly, but we urged them to issue a statement.

To learn more about Boston Common’s engagement work on DAPL, please see our recent statements. Boston Common is currently finalizing an investor letter to the banks financing DAPL. Please contact Steven Heim, if you are an investor and would like to get involved in the engagement or to request a link to listen to the recent webinar.

The information in this document should not be considered a recommendation to buy or sell any security. There is no assurance that any securities discussed will remain in an account’s portfolio at the time you receive this document. The securities discussed do not represent an account’s entire portfolio and may represent only a small portion of an account’s holdings. It should not be assumed that any securities transactions we discuss were or will prove to be profitable. Past performance does not guarantee future results. All investments involve risk, including the risk of losing principal.