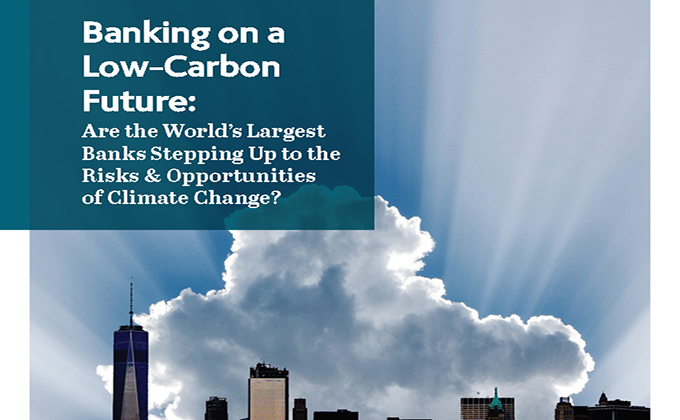 Are the World’s Largest Banks Stepping Up to the Risks & Opportunities of Climate Change?

We are pleased to share our new report, Banking on a Low-Carbon Future, which examines climate management by 59 of the world’s largest banks has found urgent shortcomings that threaten to undermine efforts to support the transition to a low-carbon economy. Despite progress in some areas and several examples of individual best practice, the sector is failing to capture the risks and opportunities of climate change. The report supports the engagement letter – backed by over 100 investors with almost $2 trillion in assets under management – sent to over 60 banks last September asking about alignment with TCFD.

The investors call on banks to take four actions:

The report however does commend the sector for some high-level advances including:

This report, which is the latest in a series of analyses undertaken since 2014, examines the progress of 59 of the world’s largest banks in making this critical business shift. This year we worked with regional partners ShareAction (UK), whose research on 15 European banks supported our analysis, SHARE (Canada), and Australian Ethical Investment (Australia).  The report finds some wide regional differences between banks around the world. For example, 80% of European banks have undertaken climate-risk assessments, compared with an average of 33% of banks in each of the North America, Developed Asia and emerging market regions.

Published On: February 15, 2018Categories: From the Commons